You Might Be Doing it Wrong! Easiest Yummiest Roast-a-touille 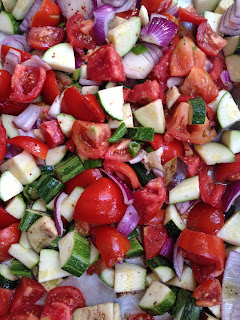 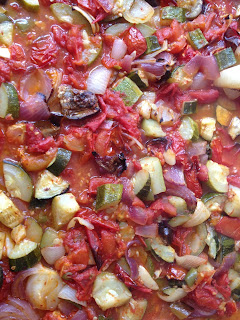 THE MIRACLE
OF
ROASTED
VEGGIES

Well, it's that time of year and the garden is EXPLODING. I have already "put by" several containers of plain roasted tomatoes destined to be soup and sauce, but I turned my back and the zucchini are scary- by this I mean scary delicious, as the variety I planted this year, the striped Italian and the 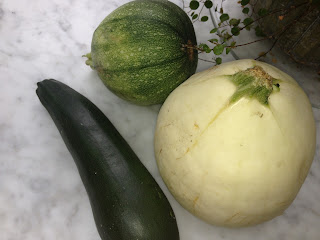 round french ones are so tasty and sweet!

Now, I love traditional Nicoise Ratatouille and there is a great blog post here with a recipe, but, honestly, I just wanted to see how I could simplify it. (feeling lazy).

In the past (hello, Temels!) I have made a delicious version of "grilled ratatouille" by simply slicing up the veggies, coating them with olive oil, grilling them, and tossing them together in a bowl with chopped garlic, a big handful of fresh chopped parsley, and a healthy dose of coarse sea salt and fresh black pepper. This is especially handy if you want a large amount, and is also good, because you can really cut back on the oil that seems to mount up in the traditional version.

But I have gotten so addicted to roasting vegetables that I decided to just cut up and roast yesterdays haul and see what would happen--- you know what happened? MAGIC! Look, I honestly if (not immodestly) have to say that my fresh-from-the-garden goodies would probably be delicious if I simmered them in bathwater, but please try this and let me know what you think. As usual, feel free to improvise on the veggies and the amounts. Add in chopped herbs if you like, some pinoli nuts, some capers, some olives- or just eat spoonfuls of it right from the pan like I did. (I know, but its true, that is what I, and everyone who passed by it did).

Preheat oven to 425, or (450 if you are willing to pay attention to doneness and/or are in a hurry).

Toss Veggies with olive oil and spread out on a jelly-roll (half sheet) pan.
Sprinkle with salt and pepper
Roast until soft and slightly charred, as in 2nd photo above, about 45 minutes, tossing it around occasionally. Keep cooking until the onions are very soft. There will seem to be a lot of liquid in the pan, but it will become absorbed back into the vegetable as it cools.
If you like, chop the mixture finer (I love using a pastry cutter, the wire kind- right on the pan).
Serve as a dip, a vegetable, or the topping for bruschetta.