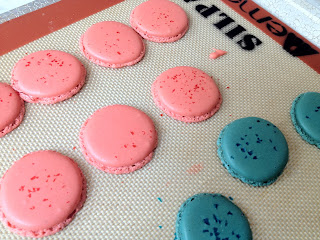 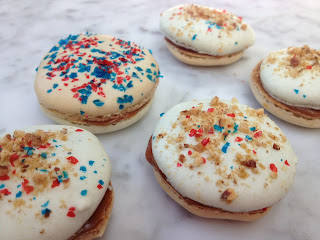 When my young friend Abigail asked to make Macarons with me I immediately agreed. I had never tried to bake them before, but I couldn't imagine that they could be difficult enough to merit their exorbitant price point in Fancy Bakery Land. Well, now I sort of get it. And I have a second-degree burn on my hand to show for the effort.

I am still in the process of perfecting this system, but If you want to try it yourself, I suggest studying this excellent slide tutorial for the technical specifics
Serious Eats Macaron Tutorial.

The recipe we used is here:
King Arthur Macaron, but today I will experiment with a recipe that does not call for inflicting huge blistering burns on one's hand, aka, one without the "Italian Meringue" process which requires the simultaneous beating of egg whites and the boiling of sugar to 138 degrees. Or else I'll just double up on the ADD meds.
HAPPY BIRTHDAY AMERICA!

Ok, so I caved and tried another recipe, one that did not result in painful blisters. And I learned some lessons.
One big one is USE A SILPAT if you have one!

This is the recipe:
I got it on a blog called Eat Live Travel Write
I know, sounds like me!