Time For Hanukkah Treats! Decorate with abandon! Stave off mid winter blues with Empty Carbs!
Of Course, there are those who would object to the kinds of decorations I have come to love: but hey, why shouldn't Hanukkah be pretty? Like this Coconut Cake with a tiny Menorah, and blue M&Ms


Time for Fun and Family, Friends, and FOOD! 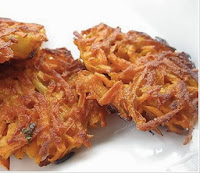 Under the influence of GG and Grandpa we learned, decadently, to love eating masses of them with creme fraiche and gravlax and caviar.

Under the influence of GG and Grandpa we learned, decadently, to love eating masses of them with creme fraiche and gravlax and caviar.


6 medium potatoes, scrubbed, peeled
1 onion
2 eggs
1/2 cup flour or cup-for-cup gluten free "flour"
1 tsp. salt
fresh pepper.
(serves about 6)
Using the shredding blade of a food processor, shred the potatoes. Set colander lined with a dish cloth in the sink to drain. Place the potatoes in the cloth lined colander, and squeeze out all the liquid you can.
Grate or finely chop onion, mix in eggs, salt and pepper.
Continue squeezing out as much liquid as you can, put half the shredded potatoes in with the onions and eggs, and return the other half to the food processor with the steel blade, and pulse a few times.
Mix the chopped potatoes in with the rest, add flour, and mix well.

You cannot really make this mixture too far in advance, as you probably know, the potato mixture will darken. However, if you cover it tightly with plastic (right on the surface of the potatoes), and cover with a dish towel, you can get about 45 minutes grace time, before the mixture turns unappealingly gray.

Heat about 2 1/2 inches of wesson oil in a large frying pan, and heat the oil till smoking. Drop a bit of the mixture in, it should sizzle like crazy. Using a deep-fry thermometer will give you the best idea of the temperature of the oil--- aim for 350 degrees for best results.

Add tablespoons of the mixture into the pan, allowing the oil to come back to temperature. Turn occasionally with a slotted spoon, and cook until they are nut-brown.

Drain on brown paper bags over a rack, and sprinkle liberally with Kosher Salt. Keep latkes warm until the batch is done on baking pans, lined with paper towels in a 225 degree oven.
Serve with Creme Fraiche, Applesauce, and Gravlax (make your own with this recipe).

Salted Caramel Rice Krispie Treats (Vegetarian)
One of the blogs that I avidly follow is called Smitten Kitchen, and I remembered seeing a recipe for these there. I have adapted it substituting Vegan Marshmallows, and Brown Rice breakfast cereal, but I invite you to try it. If you have blue sanding sugar and want to decorate with it, shake it on top of the pan while the "treats" are still warm.

In a large pot, melt butter over medium-low heat. It will melt, then foam, then turn clear golden and finally start to turn brown and smell nutty. Stir frequently, scraping up any bits from the bottom as you do. Don’t take your eyes off the pot as while you may be impatient for it to start browning, the period between the time the butter begins to take on color and the point where it burns is often less than a minute.
As soon as the butter takes on a nutty color, turn the heat off and stir in the marshmallows. The residual heat from the melted butter should be enough to melt them, but if it is not, turn it back on low until the marshmallows are smooth.
Remove the pot from the stove and stir in the salt and cereal together. Quickly spread into prepared pan. Sprinkle top with Colored Sugar if desired